The City of London is moving forward with 10 projects to improve transportation and strengthen the community, with a commitment for more than $123 million from the Government of Canada.

At an announcement in London on Friday morning, the Government of Canada pledged the contribution to transit and transit-supportive projects City Council submitted for funding consideration earlier this year. The projects include rapid transit elements, improvements to key intersections, and enhanced connections for cycling and other forms of active transportation.

“This investment represents the single largest infrastructure project in London’s history and will improve mobility for all Londoners, regardless of how they travel,” said Mayor Ed Holder. “In addition, these 10 transit projects will also stimulate job growth and road safety improvements. After years of division and delay, London is finally on the move.”

In February, City Council directed staff to bring forward a list of projects for consideration for federal and provincial funding designated for transit improvements. To be considered, the projects had to demonstrate they could improve the capacity of public transit, the quality and/or safety of transit, or access to public transit.

In March, City Council approved 10 projects to submit for funding consideration. The projects, which recently received a provincial funding commitment and today received the federal funding pledge, include:

Many of the projects – which are part of the City’s Transportation Master Plan – are shovel-ready. Once financial agreements are finalized with the Provincial and Federal governments, construction could begin on some of the projects as early as 2020.

With this announcement, the funding breakdown for the 10 transit projects submitted as part of this process will see more than $123 million from the Government of Canada through the Public Transit Infrastructure Stream (PTIS), more than $103 million from the Government of Ontario, with the balance of funding coming from the City. At this time, this includes the City’s $79.9 million share of costs considered eligible by other levels of government, with a total municipal share of approximately $148 million.

Now that commitments have been secured from both levels of government, the City will begin work to confirm municipal funding sources that will include Development Charges as well as various property tax-supported funding sources.  Once a formal Transfer Payment Agreement has been received and the municipal sources of financing finalized, a report will be presented for Council’s approval that provides a full financial overview of the 10 transit projects, with the goal of minimizing the impact on the taxpayer. 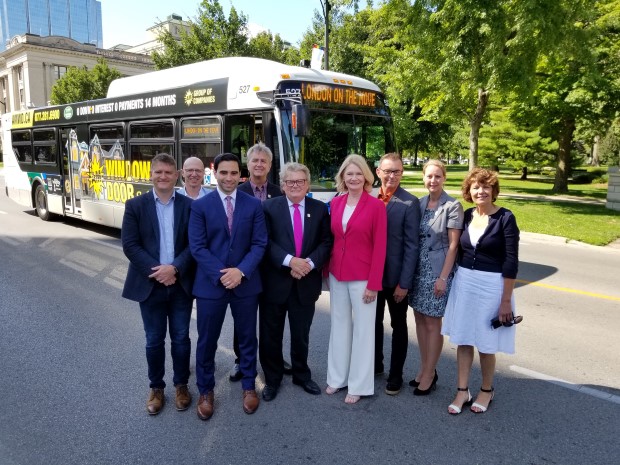