Beginning Wednesday, May 26, construction of the Downtown Loop will progress west to the block of King Street between Ridout Street and Talbot Street, resulting in lane restrictions and a new cycling detour.

A temporary bike detour will be in effect on Ridout Street from King Street to Dundas Place to provide a safer connection for cyclists traveling between the Thames Valley Parkway (TVP) and downtown. Navigational signage will be in place to help guide cyclists through the detour, which is expected to be in effect for the next three to five weeks. Using this detour, cyclists will still be able to connect to Dundas Place and nearby bike lanes such as the Dundas Cycle Track.

Construction of the Dundas-TVP Connection project continues nearby, and a signed detour is already in place at the Kensington Bridge to help direct eastbound pedestrians and cyclists through Ivey Park and onto King Street, where they can connect to the new Ridout Street cycling detour. 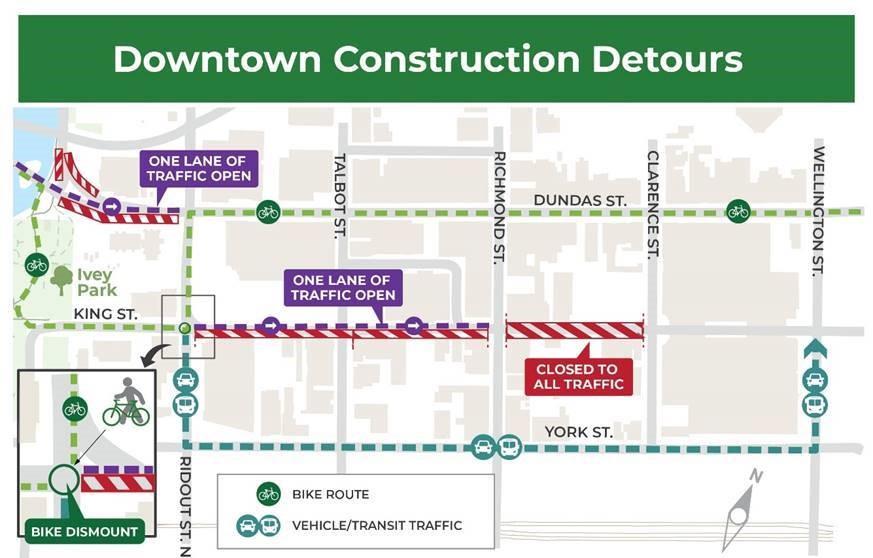 Above: Work on King Street between Ridout and Talbot Streets will begin on May 26. Cyclists will be detoured along Ridout Street when travelling between the TVP and downtown.

Business and pedestrian access is being maintained for residents and visitors in construction area. Transit and vehicle through-traffic will continue to be detoured along York Street downtown.

One lane of vehicle traffic is also being maintained on King Street between Ridout and Richmond Streets throughout construction, and drivers will still be able to access nearby parking lots as well as streets north and south of the construction zone on King Street.

Additional “park & pick-up” locations were recently added downtown for customers and deliveries, and there is also free one-hour parking on Dundas Place.

Motorists are advised to check if their commute is impacted, give themselves a little extra time if traveling, and plan ahead by using the Waze app.

The Downtown Loop, Phase 1 (King Street) is the first of London’s new rapid transit construction projects and includes upgrading sewers and watermains. Above ground, curbside bus lanes will be constructed to improve traffic capacity, mobility, and safety. New streetlights and traffic signal upgrades are also included in the project.